GAIL is a voluntary association of intelligent and scientifically advanced species formed to promote the exchange of information between their civilizations and the orderly and peaceful exploration of space. It includes four member species – Ardotians, Chlorzi, Ergints, and Humans-and negotiations are under way to include a potential fifth species, the Minutae. GAIL is not an interplanetary government. It has no power to tax and must rely on the resources provided by each member for that member’s own exploration and development activities.

GAIL maintains a permanent headquarters orbiting a small class M star about 229 light years from Earth.  See Figure 2.2 below, coordinate 60 LY at 50 degrees radial, 221 LY Z+. There, a small staff composed of members of each GAIL species coordinates efforts between members, transmits information, and serves as diplomatic liaison. It is GAIL Earth Branch – gailEarth, however, which undertakes the space effort on behalf of Earth’s people. The Earth Branch (GAILE) performs four basic functions:

1. Exploration of the galaxy for new worlds.

2. Transportation of pioneers to the colonial planets.

3. Provision of critical equipment and supplies during the early years of a colony’s development.

4. Exchange of information between the colony planets, Earth, and the rest of GAIL.

A corresponding organization exists for each of the other Association species, but Earth’s program is currently the most active. The vigor with which we Humans now pursue space exploration may result from our coming to it fairly recently. Little more than four centuries have passed since people made their “first” feeble excursions into space. The discovery of Wyzdom, the first habitable planet, just three centuries ago was as much a matter of good fortune as careful design. The development of space warp (see Interstellar Transportation and Communication) greatly extended people’s reach into space and allowed us to discover two more habitable planets before encountering the Ardots in 2217. After the initial shock of that meeting wore off, the exchange of ideas that followed enhanced the knowledge of both civilizations tremendously, and did more to advance Humanity’s exploratory capabilities than all previous space research. Ardots and Humans agreed to assist each other in the exploration of space to avoid duplicating each other’s efforts. The Ardot’s discovery of a third intelligent species, the Chlorzi of Ignati, necessitated a more formal system of cooperation which developed into GAIL.

Though GAIL has grown to encompass four members and a potential fifth, there will be no shortage of new worlds for all of them. Several members have more worlds than they need at present, for they have been exploring longer. Humans, too, may one day exceed their capacity to populate new planets, but today our supply of new worlds is limited only by our ability to find them. The Milky Way galaxy contains about one hundred billion stars, but GAILE starships need not visit each one to determine if it possesses planets “suitable for Humans.”

Astronomical observations made from Earth and the established colonies can eliminate 88 percent of all stars from the list of potential candidates. The power levels of very large or very hot stars fluctuate too rapidly to support life on any planets they might have. Though small or cool stars possess stable power levels, a habitable planet would have to orbit so close to them to receive enough energy that it would be torn apart by tidal forces. The remaining 12 percent of all stars must be explored one by one. To date, the entire space known to be explored by GAIL’s members encompasses but a tiny fraction of our great galaxy as shown in figure 2.1 below. Although most of the galaxy lies beyond our current technology, our reach grows each year. As it grows, Humankind’s potential for finding new worlds will cease to have limits. If our ratio of exploratory successes to date can be extrapolated, then our galaxy must hold at least six hundred million worlds habitable by Human beings! Each year Earth’s starships contact up to a dozen star systems. Of those, perhaps one may contain a planet suitable for colonization by any of GAIL’s members. The discovering starship remains in orbit about its find for several years, gathering data and transmitting it simultaneously to Earth and to GAIL central. 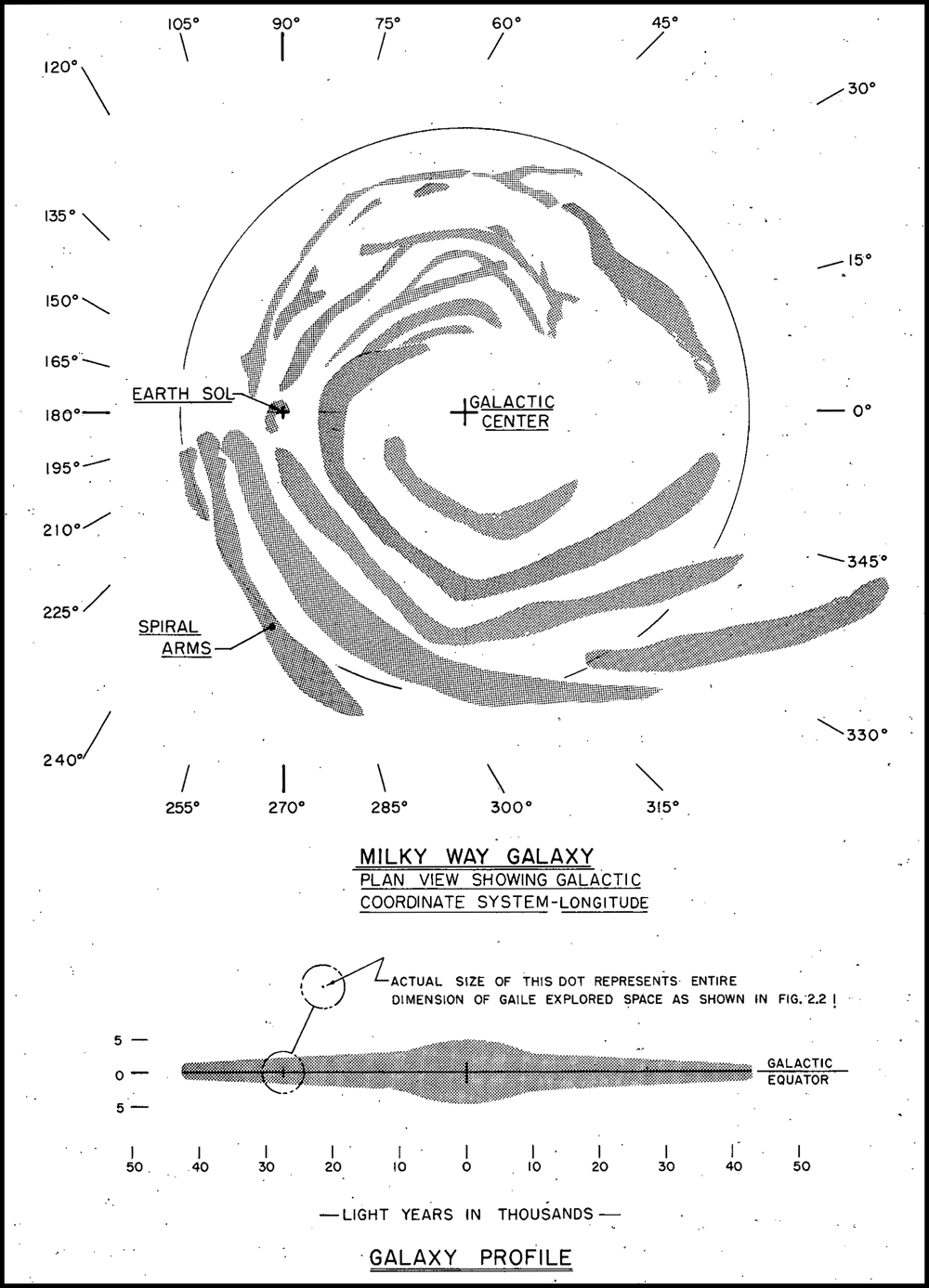 To avoid political bias and to insure equitable treatment for all GAIL members, a computer selects which member will colonize based upon both objective criteria and each member’s desire for additional planets. The computer’s program, approved unanimously by all Association members, considers such factors as the population of each member species, the number of exploratory starships it supports, and its economic ability to support additional colonies. The proximity of the new planet to each member’s home planet and, most important, the suitability of the new environment to the needs of each member species have great influence on the decision. One factor that rules out colonization of an otherwise suitable planet is the presence of a native species with potential for developing an intelligent civilization. The colonization of Earth by advanced aliens just 10,000 years ago, when people lived in caves and manifested no civilized behavior, would have precluded the development of Human civilization as we know it. Today GAIL’s members unanimously concur that all beings capable of conceptualization, self-awareness, rational behavior, and the intelligence and ability to alter their environment should be allowed to develop their inevitable civilizations without interference from others. When such civilizations have matured to the point that they leave their home planets, they will be encouraged to join the Galactic Association. In recent years GAIL’s exploratory program has dramatically increased the number of colonizable planets available to people. As that number grows, and as the cost of interstellar transportation drops, Humanity may someday be able to reduce the population of Earth!

Figure 2.2 below shows the relative positions of the Human colonies and the home planets of the other GAIL members as viewed from above the galactic plane. The actual distances to the colony worlds are shown as dashed lines for comparison. Contour lines depict the three-dimensional region of space explored by GAILE starships. It is a highly irregular space because exploratory missions are designed along paths which maximize the probability of finding habitable planets. The other intelligent species have similar explored regions around their home planets (which are not shown for clarity), and these regions now overlap those of the Human species. The extent to which the Ergints have explored the galaxy remains a mystery. They currently evince little interest in exploration but are interested in monitoring the activities of other GAIL members. Being creatures of “pure energy,” the Ergints cross the interstellar voids, in some sense, without spaceships. Many scientists suspect that long ago these advanced beings mastered the entire galaxy and contacted civilizations that Humans will not know for centuries. 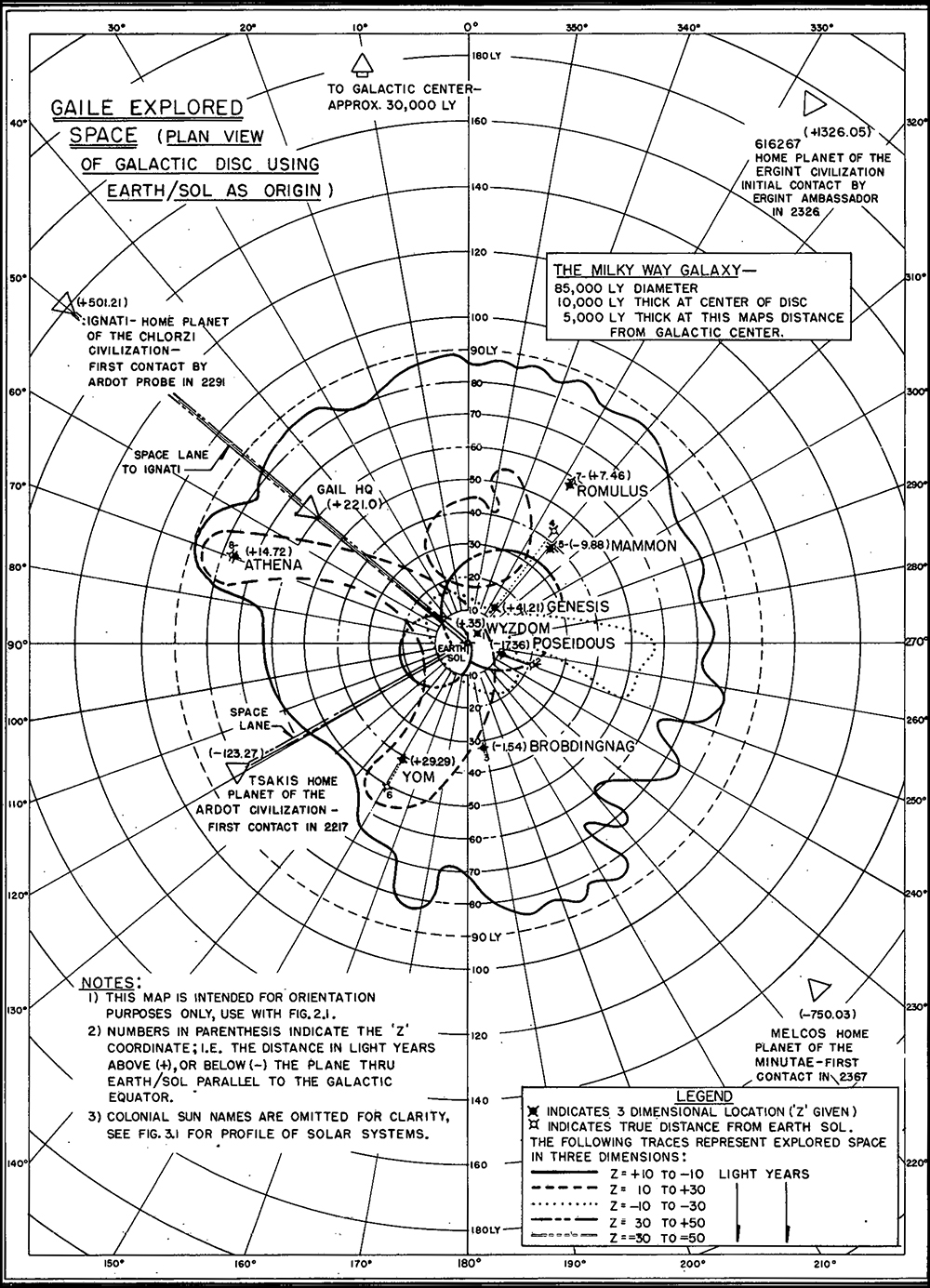