THE PLAN FOR ATHENIAN DEVELOPMENT

Editor’s note: At this release, Athena is yet unsettled by a permanent colony. Aristotle Chianakis, 35, this year’s elected chairman of the Pioneers Steering Committee of Athena, gives his summary of the state of the colonial plan. Despite his youth, Chianakis’s record of accomplishments bespeaks his ability and experience as a planner and organizer. He has operated a warehousing business and a commodity trading firm, and he has served as mayor in his home town of Burrwood (population 123,000). He became interested in the pioneering movement, joined the GAILE planning staff and served as director of loadout operations of vessels departing for Yom and Romulus.

Athena shines brighter than any other jewel in Earth’s crown of colonies. The Chlorzi starship Gnar 8, commanded by Tnuptic Kzorange, reported the discovery of Athena to GAIL in 2365 adtc. Athena’s oxygen-nitrogen atmosphere made it an unsuitable home for Chlorzi, so they proposed to swap the planet for certain exclusive mining rights on Mammon. Within six months of receiving the offer, Earth dispatched the starship Jennifer Freeman under command of Captain James Colligan to make the first Human observations of the planet. Four years later, the Freeman returned and reported Athena to be the most beautiful planet that Human eyes had ever seen.

Since then, a second party has spent another four years on the planet, bringing back enough data to finish planning the first Human settlement. Early in 2380, the first shipload of 5000 pioneers will set out for Athena aboard Earth’s largest starship. Our modular vessel of the seven hex configuration will transport more cargo across greater distance than any ship ever built. After this initial settlement, the ship will make round-trip voyages between Earth and Athena every ten months, bringing up to 7,000 pioneers in the fifth year. After that, funds permitting, a second starship may be constructed for the Athenian crossing in order to increase opportunities for pioneers.

GAILE has already begun to choose pioneers to fill the first shipload. The first 500 of them have elected me Chairman of the Pioneers’ Steering Committee. Like the other ten members of the committee, I will serve for a one-year term. At that time, and every year thereafter, the pioneers selected to date will hold another election to retain or replace each member of the Pioneers’ Steering Committee.

The PSC’s members coordinate the overall planning of the Athena colony during its first five years. Planning is crucial for a small group of people attempting to gain a foothold on an alien planet. The amount of supplies and equipment we can take will be strictly limited, yet our survival during the early years depends in large part on the hardware we bring from Earth. Such equipment is, in a sense, priceless. We cannot replace it immediately ourselves, for during the early years we will lack Earth’s sophisticated manufacturing technology. Yet loss or inefficient use of critical equipment can spell success or failure for our enterprise. Some of America’s early colonies disappeared without a trace and others barely survived. Although their technology was crude, in many ways these American pioneers faced problems less severe than those we confront on a new planet.

Eleven people can’t undertake this monumental task alone so we rely on the help of the GAILE staff and our fellow pioneers. The GAILE staff provides technical and legal expertise, scientific data, computer analysis, secretarial service, and clerical assistance. GAILE staff planners offer suggested development plans based on the experiences of other colonies; yet we pioneers must make the final hard decisions ourselves. Special planning committees of pioneers create detailed plans and operating methods for specific activities, including the court system, computer center operations, money and banking, farming, housing and building, communications, medicine, power, land use, manufacturing, transportation, and mining and natural resources. The plans of the subcommittees and the PSC must be ratified by 75 percent of the first 20,000 pioneers to provide a check on the abuse of power. During the three years until our departure, the PSC intends to submit two partially completed plans to straw votes so that they can be modified to suit a three-quarters majority. We don’t want ratification of final plans to postpone the settlement date.

At this writing, the PSC has been at work for ten months, and all plans drafted to date may be changed. Yet certain fundamental policies have been formed, and surveys of the pioneers selected so far indicate that they will probably survive final approval.

All Athena’s pioneers desire the freedom to live their lives as they wish. This means that Athena’s economy must be structured around a system of free enterprise and that its government must be constituted to prevent any person or group from violating the basic Human rights of others. All pioneers are also committed to preserving the physical environment of our new world and preventing the abuses that despoiled the Earth.

Developing plans and social structures for achieving these ends won’t be easy. Early in Athena’s development, we must face the difficult transition from an economy where all pioneers cooperatively own the means of production to a diversified economy in which no one person or group wields too much power over any one industry. Simultaneously we must guard against starting patterns of development that take the abundance of our natural resources for granted. We must insure that the future generations born on Athena, who have not seen what Earth has become, won’t forget what could happen to them.

The PSC hasn’t all the answers to these thorny problems and hopes that as the selection of pioneers continues, many will come forward to contribute their ideas. A constitutional subcommittee is currently laboring over a draft of the planet-wide constitution. This will, no doubt, see many revisions before its ratification.

We pioneers have little choice about the equipment we will take with us. Limitations of cost and space aboard ship dictate that only the minimum necessary machinery be brought. GAILE selects this equipment carefully, based on the experiences of the older colony worlds and upon the physical characteristics of the landing area.

The GAILE staff has already chosen the landing site for the first settlement on Athena. Powerful computers correlated billions of bits of data gathered by exploratory parties, and analyzed thousands of factors ranging from climate and geologic stability to soil chemistry and native life forms. The final selection maximizes the probability of success of the first settlement. Prospective pioneers may feel disappointed that they didn’t get to participate in the final choice, but the ability to choose actually has less significance than most pioneers realize. Within a few years we will spread across the landscape for hundreds of kilometers from the original site. Within two decades, new settlements, perhaps even on different continents, will offer pioneers a range of choices.

For my money, I think the planned first settlement, Carpithean (shown in figure 3.24 below), will be a very pleasant place to live. Situated on the west coast of the Freeman continent, about 40° north latitude, the landing site overlooks the North Minervan Ocean. Low mountains separated by narrow valleys cover the coastal region, and small rivers offer water for drinking and irrigation year around. The region has a mild and not too humid climate. High temperatures range from 27° in summer to 16° in winter. No snow falls this near the ocean, and rainfall averages 75 to 90 centimeters annually, an amount sufficient to cover the surrounding hills with broad, leafed, flowering trees. 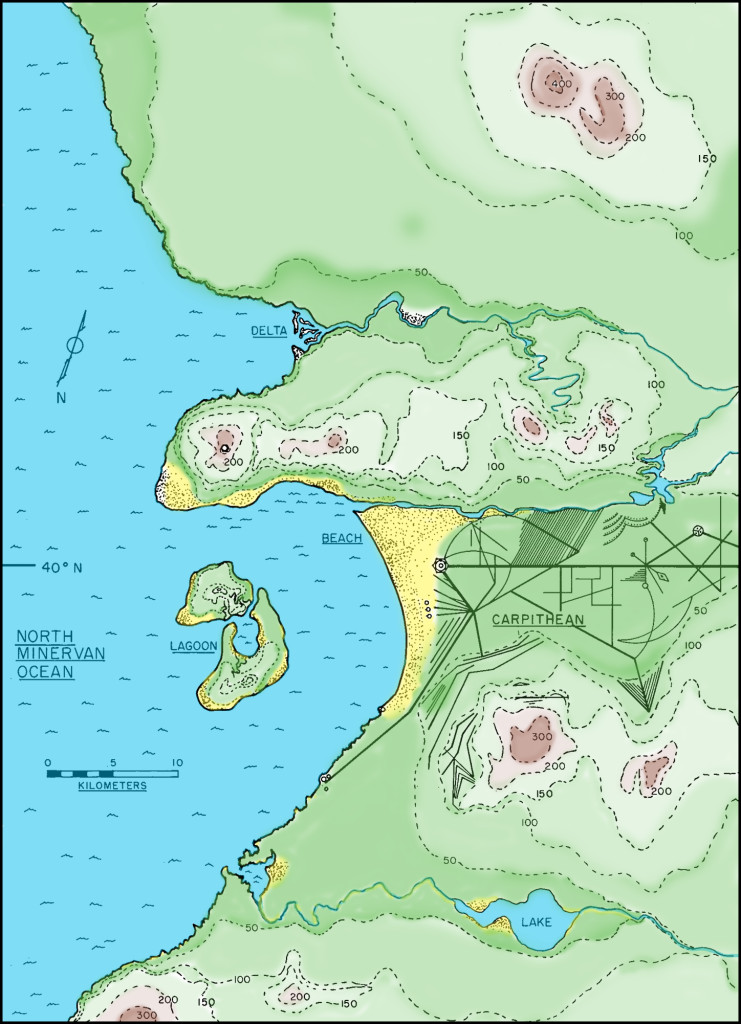 This Map shows how the first settlement of Athena might look in 2385 with an estimated population of 36,000.  The first spires will ground at the seaward end of a flat-bottomed valley that will provide an excellent site for the first experimental farms and the first small industrial complex. To the west, a forest and a wide beach opening on a protected bay will serve as recreational areas. To preserve the natural beauty of the beach area, the current plan calls for locating the deuterium plant that supplies our fuel further to the south.

So much remains to be decided, that I can only speculate on what the first five years on Athena might be like. During those years, life in the first settlement will resemble life in a small town. We will spend most of our time just setting up the myriad forms of equipment needed to support our modern lifestyle. We must prepare to grow our food, mine raw materials, establish a communications network, and build shelter for ourselves and our business enterprises.

Despite the compactness of our settlement, I expect thoughts of expansion will occupy every person’s mind. Each of us will work toward the day when we can move beyond the confines of our narrow valley and spread out on comfortable tracts of our own land. I suspect that even in the first year pioneers will take every opportunity to explore and examine the area around the first settlement, looking for places to live, new life forms, and vistas of natural beauty that no one from Earth has viewed in our lifetimes.

The Athenian colony will attempt an experiment unique among the colonial worlds. Athena possesses an abundance of native fruits, vegetables, and grains, of sufficient variety and food value to be acceptable to a Human population. Consequently, the agricultural committee’s current plans call for developing native Athenian food crops instead of importing familiar strains from Earth. This program will require much more work during the early years. Our familiar crops on Earth are products of centuries of selective breeding techniques which have produced hybrid strains with high yields and resistance to disease. No one has ever cultivated Athenian foods, and we are uncertain about the pests and diseases that might beset them.

In the long run, however, Athenian species will unquestionably adapt better to the native environment than Earth species could hope to. When Athena’s farm technology is well developed, it will undoubtedly provide a cheaper and more nutritious source of food than imported varieties. In the unlikely event that these plans don’t work out, the colony will keep on hand one year’s supply of emergency food that can be replenished by starship if necessary. Contingency plans will also be developed to introduce appropriate Earth species should the native crops fail.

The most important and exciting potential lies in the type of society we choose to develop. We, the first pioneers, will shape the lifestyles, social customs, ethics, and institutions of our planet. Whether Athena becomes a good world for people or a bad one, whether our world becomes a cultural backwater or the center of a transgalactic civilization depends on us. If we went to Wyzdom or Brobdingnag, we would have to accept a large part of the cultural norms established by their first pioneers centuries ago. True, we would still have, more freedom there than we have on Earth, but it would be a limited freedom. Only on Athena will we have the options to make our world anything we want it to be!