Just hours ago, the exploratory starship Aurora dropped out of warp drive and began transmitting data from its mission. The crew discovered a planet in the habitable zone of 59 Virginis (HR 5011) that, unfortunately, is not suitable for settlement by humans at this time. The planet is physically similar to earth of about 500 million years ago.  Primitive life forms live in the oceans.  There is no life on land. Consequently, it would not be possible to grow crops or raise domestic animals that could support human life. 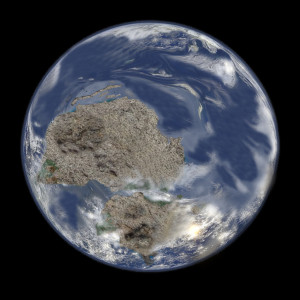 The third planet in the system 59 Virginis has no land life.

The Aurora’s captain, Ben Alan, believes that terraforming may enable people to live on the planet in the foreseeable future. He wrote in a message, “Despite the planet’s inhospitable environment, I believe that someday Humans will live on it. The planet contains the fundamental conditions necessary to support our form of life. When our technology advances enough to allow us to transport much larger payloads across interstellar space, then we will be able to bring enough equipment and enough supporting life forms from our mother planet to permit life as we know it to thrive there.”

Captain Alan has proposed the planet be named Genesis, after the creation story of the Old Testament (Tanakh). With so many resources being devoted to development of three other habitable planets, it is uncertain when the development of the new planet might begin. But the ICSE is almost certain to send more scientific missions to 59 Virginis in the near future. The opportunity to study a planet in the early stages of biological evolution may provide tremendous insights into the origins of life on our mother Earth. Follow this link for additional information.