The starship Golan returned from an extended voyage to announce discovery of the third exoplanet that is potentially habitable by humans. But the current inhabitants may pose a challenge for new settlers. The third planet in the system Chi 1 Orionis is populated by giant animals reminiscent of the dinosaurs that lived on earth until 65 million years ago. The animals are not related to terrestrial dinosaurs but bear many resemblances, suggesting parallel evolutionary mechanisms. They include both carnivores and herbivores and sea and land varieties. The large carnivores are the most dangerous animals ever encountered by human beings. 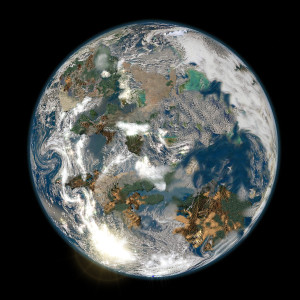 Captain Valarie Nhivitney has tentatively named the planet Brobdingnag after the mythical land of the giants in Jonathan Swift’s novel Gulliver’s Travels. The name must be officially approved by the International Council for Space Exploration. The crew has brought back a wealth of biological information including physical specimens and thousands of hours of video images. We hope to release some of these to the public in the near future. Follow this link for additional information.