The first data transmissions from the Starship Freedom 4 received today contain images of an earth-like planet orbiting Alpha Centauri A only 4.3 light-years from earth. The planet is slightly larger than Earth with a diameter of 14,542 kilometers. It contains oceans, four large continents, and thousands of islands. The planet spins much faster than earth, making its day only 13 hours, 18 minutes compared with 24 hours on earth. 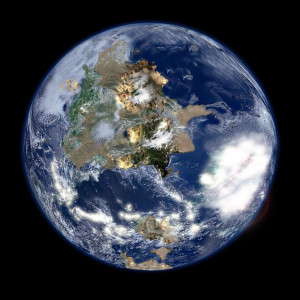 Image of the third planet orbiting Alpha Centauri A

When this message was received, astronauts had not yet to set foot on the planet, but spectrographic analyses from orbit reveal an atmosphere of nitrogen and oxygen breathable by humans without mechanical assistance.

But since the message — traveling at the speed of light —  took 4.3 years to arrive, astronauts have had all that time to explore the planet’s surface. We expect additional reports on the planet’s life forms and other characteristics to follow in the months and years ahead. Follow this link for additional information.