The first transmissions from the starship Armageddon reached earth today, bringing news of the discovery of a second exoplanet habitable by humans. The planet orbits the star 82 Eridani slightly more than 20 light-years from Earth. The surface of the planet is covered almost entirely by ocean with no continents protruding above sea level. Thousands of islands dot the planet’s surface, giving it a land area of only 1.5 percent of the total, compared with about 30 percent on Earth. 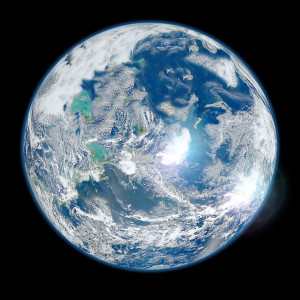 The astronauts have recommended naming the planet Poseidous after the god Poseidon of ancient Greek mythology, who was believed to rule the oceans. The final choice must be approved by the International Council for Space Exploration.

The Armageddon is not expected to reach Earth until 8 January 2156 as it will take nearly 8 months to decelerate from near light speed. In the interim, we can expect more data transmissions with information about the planet’s climate, environment, and life forms. The ship is also bringing biological and geological samples. We all look forward to the safe return of our brave astronauts and hearing firsthand accounts of their adventures. Follow this link for additional information.